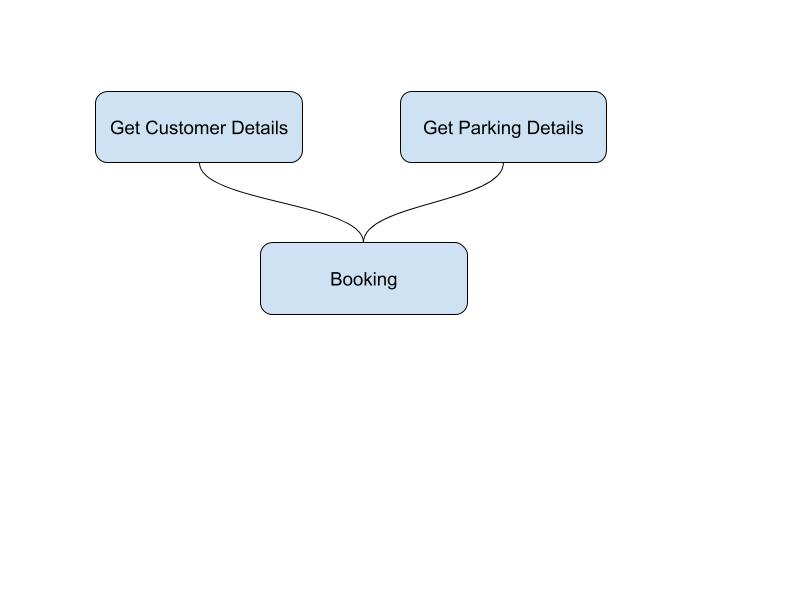 One which used to do tasks for us in a separate thread and return a future object where we can get the result.

Let’s refresh the memory with a small code snippet showing Future at work.

Here, our code will wait until findCustomerDetails() works and return the result or the timeout happens. There is no way, to explicitly complete this future.

Let’s assume, we have to design a booking flow for parking. The flow looks like as follow:

Future does not provide any way for call back after the completion of getCustomerDetails and getParkingDetails, so that we can start booking operation just after.

We would ideally want to do these three operation chained together, and such chaining is not provided by Future APIs.

Similarly, Exception Handling has to be done outside the future APIs.

We would like to approach completable future through examples.

In the example above, the runAsync API of completable future takes runnable, which is provided in lambda. The example above does not show any difference between CompletableFuture as well as Future. But we will get to it.

With this introduction and motivation, it’s time to formally define Completable Future.

Completable Future implements Future. In a way, Completable Future is a future that can be explicitly completed. It can also act as an CompletionStage by providing way to support dependent functions. It also provides way to callback or in other words, support actions that can be triggered on it’s completion.

The above statement will cause program to run forever. Because there is nothing for the completable future to do.

This has already been explained above. In the example above, the runAsync API of completable future takes runnable, which is provided in lambda.

Supply Async takes a supplier. Reminder: Supplier is a kind of functional interface that does not take any input but provides an output.

Here, we are giving Completable future a supplier lambda and returning a result which we then get as we would have done in Future.

Let’s say you want to do some action after the completion of a Completable Future. There is nothing to be returned in that action, then you would use thenAccept as shown in the example above. ThenAccept takes input from the previous Completable Future and works on it.

Suppose you want to trigger some action after the completion of a completable future. And you don’t have any input from the completable feature as well as no output to be returned.

Output in this case would be:

Assume something wrong happened with the task in CompletableFuture and you want to complete it and throw and exception so that the client of your API does appropriate handling of the exception. In such cases, you would use completeExceptionally.

You can cancel the future if you don’t need it anymore. Further, there is an option to cancel it if it’s running. CompletableFuture.get() throws an exception when you get in a cancelled completable future. isCancelled() API lets you check if it is cancelled or not.

Github link for the programs shown above

Comparison of Iterative, Future as well as CompletableFuture

We have covered all the major concepts. We will try to cover remaining ones in later post.